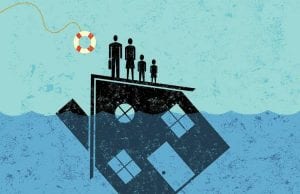 A new report issued by the American Enterprise Institute indicated that the national mortgage default risk remained high in March, even though it dropped slightly from February.

The group’s National Mortgage Risk Index (NMRI) measures the percentage of homeowners who would default on their mortgage in the event of another economic crisis.

The AEI’s International Center on Housing Risk reported in its index that facing economic stress, 11.5% of people who recently took out mortgages on new homes would default on those loans, compared to 11.6% in February.

Ideally, a stable housing market should have a maximum default rate of about 6%, according to the AEI.

The driver of this statistic is how lenders define Qualified Mortgage (QM), which is the risk lenders are willing to take to offer new mortgages. All of the mortgages included in the AEI index were classified as QM, yet half had a down payment of 5% or less and nearly a quarter of the mortgages had a total debt-to-income ratio (DTI) that was higher than 43%. Loans that are guaranteed by the federal government are exempt from the 43% cutoff.

“High DTI loans are risky, with a stressed default rate well above that for all loans regardless of DTI,” the analysts said in the report summary.

But there was even more bad news for the stability of the housing market. Despite the slight drop in the NMRI between February and March, expected default rates on loans held by Fannie Mae and Freddie Mac have continued to inch higher than 6%, while the mortgages insured by the Federal Housing Administration (FHA) and Rural Housing Services (RHS) climbed up to 24.1%. Both of these anticipated default rates represent record highs.

The share of high-risk loans decreased once more – to just about 35% — due in part to a fall in the FHA loan share, according to the AEI analysts.

Looking forward, the Center on Housing Risk does not anticipate that lenders will become pickier about borrowers because lenders – and even some regulators – are moving to open up credit standards to allow more people to take out mortgages.

“In a housing boom, mortgage lending moves out the credit curve,” the AEI analysts said in the report summary. “Credit risk is rising as political pressures are again pushing for degrading lending practices.”

When it comes to where the credit risk is high, the results are literally all over the map, according to the NMRI report summary.

At the state level, potential default risk was highest in Mississippi and lowest in Hawaii, although the State-level Mortgage Rate Indices (SMRIs) have been rising in most states.

Looking more closely at California, the nation’s most populous state, mortgage risk was highest in the Central Valley region and lowest in the San Francisco Bay area.

According to the AEI’s report summary, the financial crisis in the housing market was caused by a failure to understand the buildup of housing risk. Specifically, it pointed to mortgage risk, house-price (collateral) risk, and capital adequacy.

But the AEI’s International Center on Housing Risk already is attempting to address the current situation by providing objective and transparent risk measures, publishing mortgage risk indices monthly, and releasing indices of collateral risk and capital adequacy later this year.

The NMRI is based on the principle that market stability depends on the preponderance of loans being low risk, which is defined as good performance even under stress. The NMRI provides a stress test on home mortgages which is similar to crash tests for cars and structural stability ratings for buildings located in hurricane zones.

The index is based on loans placed in risk buckets and assesses default risk based on performance of 2007 vintage mortgages with similar characteristics. It currently covers about 75% of all purchase loans, including nearly all government guaranteed mortgages for home purchases.

The AEI plans to expand the scope of the NMRI later this year to include the Veterans’ Administration, non-agency loans, refinances and second mortgages.

In the meantime, the AEI will continue to closely track the NMRI so that they can accurately predict the percentage of homeowners who would default on their mortgage in the event of another economic crisis. Click here to learn more about avoiding mortgage default risk.