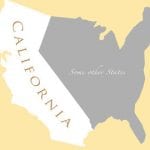 California foreclosure rates are falling from last year but there’s still a long way to go to reach national averages. The state has worked through much of the backlog of foreclosures, with every foreclosure attorney in Los Angeles and Orange County hustling to help distressed homeowners salvage their freedom. There’s still a lot of work left to do though.

California’s recent foreclosure rates were compared with the rest of the country in a recent DSNews story charting the progress of large metro areas. According to data published by RealtyTrac, the third quarter offered some optimism for those living in cities with more than 200,000 residents. Of the 212 metro areas, 134 saw declines in foreclosure activity from the 2nd to the 3rd quarter. In 131 of the same metro areas, year-over-year activity was down.

Of the largest cities, Los Angeles and San Diego had declines at 29 percent and 26 percent, respectively. Apparently, the massive amount of foreclosure help in Orange County was matched by the two major cities of Southern California. Also of note, foreclosure activity was down 36 percent in San Francisco, 31 percent in Detroit and 27 percent in Phoenix.

As a non-judiciary state, California may have been able to bring more of its foreclosures through the system in recent years. Such states allow a default letter to be sent by the loan servicer after the default. The borrower can either resolve the default or the foreclosure proceeds according to established procedures. Judiciary states require that the process be handled within the state’s legal system, eliminating the option of two parties settling privately. Foreclosure cases get backlogged in states like New York, Florida and Illinois. Increases of 69 percent in New York City, 43 percent in Tampa and 34 percent in Chicago are one result.

Despite the amount of foreclosure help being offered in Orange County and the rest of the state, seven of the 10 highest rates were in California. Stockton ranked the highest in the survey, with one out of every 67 homes receiving a foreclosure notice. The city’s foreclosure rate was 21 percent higher a year ago.

Stockton was one of three California municipalities that filed for Chapter 9 in the past year. Even a Los Angeles bankruptcy attorney would be challenged to sort out such problems. Mammoth Lakes and San Bernardino were the other two. The last may be a surprise considering the Inland Empire’s hot housing market. But the Riverside-San Bernardino-Ontario foreclosure rate was still well above the national average.

Included in the top 10 foreclosure rates were Bakersfield, Merced, Modesto, Sacramento-Arden-Arcade-Roseville and Vallejo-Fairfield. Across the country, one out of every 248 homes was in foreclosure. In these metro areas, the rates were up to three times higher despite falling from 2011.

As the country’s most populace state and its trendsetter in the housing market, California has begun to recover from the wild swings of years past. But more healing is needed. The work continues for every foreclosure and bankruptcy attorney in Los Angeles and the other metro areas. There may be more pain ahead before a market improvement is sustained.

If your home is in danger of being foreclosed on, reach out to Oaktree Law, the Los Angeles foreclosure lawyers with the experience to protect your home and assets.  Give us a call to learn about your legal options: (562) 219-2979.