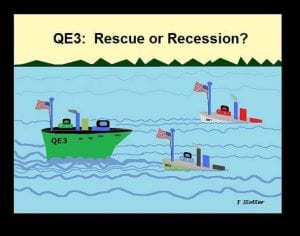 A number of announcements and reports were issued in mid-September that affected homeowners in Southern California. A federal report detailing August housing starts showed a 2.3% increase, just a touch under expectations. Permits for future starts were down 1% but still 24.5% higher than August 2011.

Sales of existing homes rose 7.8%. Nearly all markets around the U.S shared in the growth. The national median price rose and was 9.5% higher year over year. Inventory decreased and the percentage of distressed sales fell as well.

All this housing market news was either more of the same or reason to be optimistic, depending on one’s perspective. Though the news most likely to affect Los Angeles residents in need of help for underwater mortgages was the Fed’s announcement of QE3.

The 15-year fixed mortgage rate fell to 3.03%, a historic low, while the average FHA sponsored 30-year fixed rate maintained its low of 3.5%. The effects of the Fed’s newest efforts may push both rates even lower.

As part of its attempts to increase market liquidity, the Fed will purchase $40 billion worth of mortgage-backed securities each month indefinitely. If things go as planned, mortgage rates will drop. Lower rates could help stop some foreclosures in Los Angeles and other housing markets.

According to Stuart Hoffman, chief economist of PNC Financial Services Group, mortgage rates will certainly fall over the long term. He predicts the 15-year mortgage rate could fall to 2.75%. The 30-year rate could be lowered to 3.25%. “The last time interest on either loan type hit those kinds of lows was the late 1930s during the Great Depression.”

Hoffman also suggests that lower rates will help bring more buyers into the market. With increased demand, home values could rise in Southern California, providing some help for underwater mortgages in Los Angeles and surrounding counties. However, the safer bet may be the new demand lower rates create for refinancing.

Though consumer confidence and underemployment may limit a significant uptick in purchases, refinances could be more common. For homeowners that haven’t already refinanced, an opportune time may be approaching.

Los Angeles homeowners hoping to stop foreclosure before it becomes imminent can consider new options offered by HARP 2.0. Still a government-backed initiative, the HARP program has been streamlined in order to qualify more homeowners.

If payments on a Fannie Mae or Freddie Mac loan have been on time over the past six months, the loan was securitized before June 1, 2009 and the homeowner has at least 20% equity in the home, a refinance may be possible.

The new terms of HARP have removed key barriers. There is no longer a maximum loan-to-value limit. Minimum credit score requirements, proof of income requirements and proof of asset requirements have all been dropped. Sometimes, a home appraisal is not even needed.

The Fed’s newest round of quantitative easing is certainly a controversial measure. While pundits and analysts try to predict the economy’s response, homeowners seeking help for underwater mortgages in Los Angeles and Orange Counties can consult a foreclosure attorney. Call Oaktree Law to speak with a skilled loan modification attorney that can answer your legal questions. Many may take advantage of mortgage rates that could be the lowest we’ve ever seen.